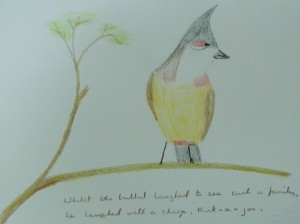 The young buffalo rocked gently as she wallowed in the warm mud of the river bank. Above in a tree a lizard watched her then he blinked and seemed to fall asleep. In his pea green coat he blended in well as he perched on the mente tree. However if you watched him carefully every now and then his tongue would slip out between his teeth as he tasted the air.

But the young buffalo was not watching, for her breakfast beckoned, a luscious growth of new tender reeds. Leaving behind her soft river bed of mud she swayed, lurched and tottered along the river bank until she reached the juiciest clump, which unfortunately for her was directly under the roosting lizard.

A small fragment of saliva dropped from the lizard mouth, but Puteri did not notice, however Aryan her father did notice. As the lizard slithered from his perch Aryan charged.

A collision was inevitable. Aryan struck the lizard just behind its ear. The lizards jaws snapped shut two inches short of Puteri. The lizard rolled over and over. Aryan called out run Puteri, run home as fast as you can. Puteri ran till she reached the small farm that her family call home.

The lizard shook himself, then looked angrily about to see who had denied him his lunch. Aryan stood his ground as the lizard roared in anger.

Although Aryan told the lizard to calm down, then turned away to go home, the lizard angrily shouted that he would find the young buffalo and have his lunch.

Aryan decided that to keep Puteri safe, that she should go and stay at her aunt’s farm at Bukit Wang in Perlio. That evening the Puteri’s and her family set out for her aunt’s farm.

The family travelled all night through open countryside and crossed several rivers to reach Bukit Wang before arriving in the morning at their destination, a small homestead, set in a wide flat valley where the farmers grew rice. Here no there were no lizards so Puteri grew into a fine water buffalo, but not before having several other adventures.

Whilst above in a fine tree the bulbul laughed to see such a buffalo, he laughed with a sharp, kink-a-joo, kink-a- joo. Later he may tell you about Puteri’s other adventures.

I first heard about Puteri and her family in May 2014, Puteri’s mother told me about her daughter’s narrow escape from a giant lizard. She also told me that Puteri’s cousins the wild water buffalo are under great pressure from the increased use of land for farming. She and I hope that her daughter’s story encourages you to take an interest in water buffalo.

Looking out of the window Benjamin glazed longingly as his friends descending the twisting slide.…

Please let us in Col Rhubarb, it is coming, we heard the church bells and…